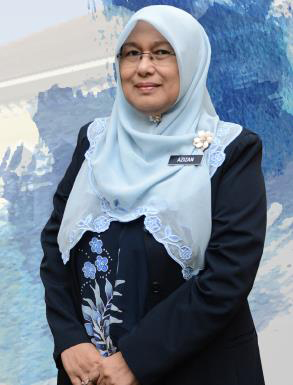 YBhg. Datuk Prof. Dr Azizan Baharuddin received her B.Sc (Hons) in Biology from the University of Tasmania, Australia in 1978, MSc (Univ. College London) in 1979 and PhD in Philosophy of Science (Science & Islam) from the University of Lancaster, U.K. in 1989. She specializes in several areas such as sustainable development, environmental ethics, interfaith and inter-civilisational dialogue, Islam and science, bioethics, as well religion and sustainable development.  She was also one of the drafters of the Islamic Declaration of Climate Change (http: www.ifees.org.uk/declaration/).  She has published widely in all these areas (more than 200 books, book chapters, monographs and articles). She is active in several governmental organizations (GO) and non-governmental organizations (NGO) connected with her areas of specialisation, as well as being a member of various advisory and consultative committees for various ministries in Malaysia. She was appointed by the Prime Minister, Chairman of the National Committee for the Promotion of Understanding and Harmony Among Religious Adherents (JKMPKA) from 2014 – 2015; appointed by the Minister of Science, Technology and Innovation as member (2009 – current) and Chairman of the National Bioethics Council (2014 – 2015). She was appointed by the Director-General of UNESCO as Member of the International Bioethics Committee in Paris (2014 – 2017). She is also one of the Malaysian experts recognized by UNESCO.  Due to her work and contribution in the area of Science & Religion, she has received an award from the Centre for Theology & Natural Sciences (2001), USA.  She was Director at the Centre for Civilisational Dialogue University Malaya (2000 - 2011) and Professor at the University of Malaya until 2015. She was appointed the Deputy Director-General of the Institute of Islamic Understanding Malaysia/Institut Kefahaman Islam Malaysia (IKIM) in 2011 and the Director-General in 2015.  In 2016 she received the Langkawi Award for her work on Environmental Ethics and the Maal Hijrah Award for the Federal Langkawi (Wilayah Persekutuan). Most recently she was as appointed member of the Shariah Board of Directors of QSR Brands Holdings (M) Berhad.  As well a member of the Board of Advisors for the Organisation of the Legacy of Tun Abdullah Ahmad Badawi (LEGASI) and member of the Board of Director of Dewan Bahasa dan Pustaka (2016 – 2019).